Sale on Canvas Prints! Use code ABCXYZ at checkout for a special discount!

Previous Next View All 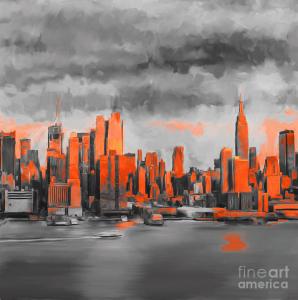 The building form most closely associated with New York City is the skyscraper, which has shifted many commercial and residential districts from low-rise to high-rise. Surrounded mostly by water, the city has amassed one of the largest and most varied collections of skyscrapers in the world.[1]

New York has architecturally significant buildings in a wide range of styles spanning distinct historical and cultural periods. These include the Woolworth Building (1913), an early Gothic revival skyscraper with large-scale gothic architectural detail. The 1916 Zoning Resolution required setback in new buildings, and restricted towers to a percentage of the lot size, to allow sunlight to reach the streets below.[2] The Art Deco design of the Chrysler Building (1930) and Empire State Building (1931), with their tapered tops and steel spires, reflected the zoning requirements. The Chrysler building is considered by many historians and architects to be one of New York's finest, with its distinctive ornamentation such as V-shaped lighting inserts capped by a steel spire at the tower's crown.[3] An early influential example of the international style in the United States is the Seagram Building (1957), distinctive for its facade using visible bronze-toned I-beams to evoke the building's structure. The Condé Nast Building (2000) is an important example of green design in American skyscrapers.[4]

The character of New York's large residential districts is often defined by the elegant brownstone rowhouses, townhouses, and tenements that were built during a period of rapid expansion from 1870 to 1930.[5] In contrast, New York City also has neighborhoods that are less densely populated and feature free-standing dwellings. In the outer boroughs, large single-family homes are common in various architectural styles such as Tudor Revival and Victorian.[6][7][8] Split two-family homes are also widely available across the outer boroughs, for example in the Flushing area.

Stone and brick became the city's building materials of choice after the construction of wood-frame houses was limited in the aftermath of the Great Fire of 1835.[9][10] Unlike Paris, which for centuries was built from its own limestone bedrock, New York has always drawn its building stone from a far-flung network of quarries and its stone buildings have a variety of textures and hues.[11] A distinctive feature of many of the city's buildings is the presence of wooden roof-mounted water towers. In the 19th century, the city required their installation on buildings higher than six stories to prevent the need for excessively high water pressures at lower elevations, which could burst municipal water pipes.[12] Garden apartments became popular during the 1920s in outlying areas, including Jackson Heights in Queens, which became more accessible with expansion of the subway.[13]